I am cursed with . . . Prepositions.  God, I hate prepositions.  I know they are what a rat can do to a chair, but that doesn’t help me. 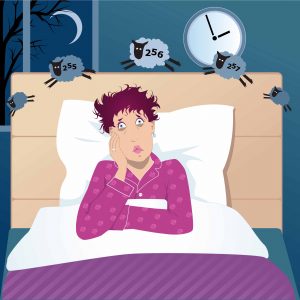 Then there’s another curse. I’m talking about INSOMNIA. Sleeplessness, wakefulness, restlessness—the dictionary said.  I understand insomnia is suffered across the full spectrum of humans, and that we share this condition with catfish, cockroaches, great grey slugs, armadillos, beaver, and hyenas, among many others.

I suspect a disproportionate number of writers suffer from voices in the night, and unfortunately for me they frequently come right after I’ve turned out the light.  The voices come to me as fully developed plots populated by heroic characters, and when I wake I am lucid, and manage to get those stories in their entirety into the computer.

No, I lie.  The truth is, voices come to me as garbled bits of dialogue and flat characters that won’t resolve themselves, but also won’t leave me alone and let me sleep.

When I mentioned this to a friend, who is a mental health counselor, she suggested a technique she uses for relaxing the mind into sleep which she finds very helpful. The technique is this: inhale deeply and when you exhale, visualize the number 1. Repeat, visualizing the number 2 at the exhale, and continue to the number 10. Then reverse, visualizing 10, 9, 8, etc.

This is how it worked for me:
Deep inhale, exhale visualizing the number one, which for me was written on a white piece of paper in pencil, but pencil is hard to read so I should have written it in ink

but numbers aren’t things, they’re concepts, or constructs – which is it? Both, maybe? Neither?
– so how do I visualize a concept/construct/whatever it is?

The numeral, of course! the graphic representation of aforementioned whatever,

but still I see myself writing it, my hand moving across the paper, lined yellow paper this time.

What I need is a fixed, static graphic representation, like those large cutout numbers and letters my first grade teacher used to stick up on the felt board.

That’s it!! Now I can see the numbers as fuzzy cutouts. I can also see the felt board and it’s a bright rubber-ducky yellow.

I see my first grade teacher, and the rhinestones in the frames of her glasses,

and I can see the radiator the felt board hung above, and holy cow I haven’t thought about radiators in decades,

and there it is, crystal clear, so maybe I should be visualizing radiators,

but no, I’m supposed to be using numbers to count up and then down.

But since I can’t seem to get a fix on the numerals maybe I should count something else. People count sheep, don’t they?

But the only sheep I’ve ever been around bunch up and are hard to count.

I need to find some way to separate the sheep,

but they keep bunching up and the wadded sheet is choking me.

In desperation I go back to radiators,

but oh boy, did radiators ever dry out the room, even one of them, and now my neck itches . . .

I turn the light back on and read until I’m so exhausted I don’t need the numbers or the sheep or the radiators.

And I’m not admitting any of this to my mental health counselor friend.